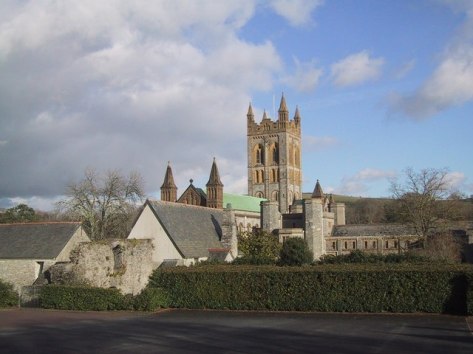 Every evening, in Bethlehem, Connecticut, forty Benedictine nuns settle into the Night Silence that follows Compline, the last Office of the day. All speech is curtailed but for the prayer and praise of Matins at 1:50 a.m., then the profound monastic silence continues until well after daybreak.

Forty is rather a large community in this day and time. One cannot help wondering how it is that this monastery (Benedictine nuns live in monasteries, not convents) seems to be thriving when compared with many others. Perhaps it is because Delores Hart is cloistered there.

Mother Delores has become something of a monastic celebrity. She was a beautiful Hollywood ingénue in the 1950’s, just beginning a meteoric rise to fame. She made ten films, gave Elvis Presley his first on-screen kiss, and enjoyed tremendous success on Broadway before a day trip to Regina Laudis set in motion a change of vocation. From starlet to postulant to Professed Nun, she is still the only cloistered monastic who receives a ballot from the Screen Actors Guild every year when the Oscar nominations are announced!

Although a charming documentary of Mother Delores’ life was nominated for an Oscar, the nuns and superiors of Regina Laudis attribute the permanency of this monastery to, of all things, the fact that the nuns maintain a traditional approach to monasticism. They wear the full habit, a practice nearly lost since the councils of Vatican II, and they sing and pray the Divine Office in its entirety, in Latin, in Gregorian chant, every day. Many religious orders have curtailed their Office to only two or three communal gatherings, sometimes optional. Mother Duss, the founding Superior of Regina Laudis Abbey, said that she was intuitively certain that the ancient paths were the ones marked out for her Sisters. It seems she knew what she was talking about.

What now has any of this, the success or failure, indeed the existence or dissolution, of the Abbey to do with you or me? Of what interest to us are habits, long, short, full or forgotten, of what manner of intrigue or matter of importance is it to us whether nuns in Bethlehem, Connecticut or Bethlehem, Israel (and there are convents there) sing or chant, pray or maintain silence?

It is this. While these women and others like them, men and women all over the world, are living lives of intense prayer and praise on purpose and continually, learning to hallow and appreciate the nearness of God every hour of every day, they in their cloisters are not alone.

A tiny fragment of society, they are joined by hundreds of thousands of others in all walks of life, still a tiny slice of the population pie, but just as devoted within the confines of their workaday vocations as the nuns of Regina Laudis are in theirs. These “marketplace monastics” have learned the delights of devotion and the dignity of self-discipline. Across the board, they make no claim to have become experts in their chosen pursuit; first they chose, and then they learned to follow hard after the Lord they love.

These urban professionals, these young mothers and older widows and college students and “still single” men and women are the monks and nuns on their block, living in townhomes and tenements, in the suburbs and the outback. Some are Catholic, and there is a sweeping move of Catholic oblates who take their at-home monasticism very seriously, but others are just believing Christians who want to make sure their prayers are “without ceasing” and that they are faithful in worship and thanksgiving and stillness along the way. Some have fit devotion into their marriages and professions and parenthood and some have fit it into solitude and loneliness. If you are alone, if your life has taken a turn into widowhood or divorce or if you have remained single stretching over more years than ever you would have imagined, there is a place for you in this Abbey. This is Cor Unum Abbey, the monastery of the heart.

Do not imagine that crossing the threshold means you can never marry or that you can never again go out to dinner with friends. Do not imagine that if you choose to remain single and begin to want to stay so, that you cannot dwell here in fullness of joy all the days of your life. This cloister is founded upon Jesus’ words in the fourteenth chapter of John, words perhaps all too often misunderstood.

“Do not let your hearts be troubled. You believe in God; believe also in me.  My Father’s house has many rooms; if that were not so, would I have told you that I am going there to prepare a place for you?  And if I go and prepare a place for you, I will come back and take you to be with me that you also may be where I am. (John 14:1-3, NIV)

We often hear these verses quoted from the King James translation … “In My Father’s house are many mansions,” and we do like the sound of that, but Jesus did not go to the cross or return to heaven to build ornate palaces for us … there may be splendid ones in heaven (or there may not,) but that is not the place prepared by the finished work of Jesus Christ on the cross of our salvation. The preparation of which the Lord speaks was that which made ready a way that we might dwell in Him and He in us, an accomplishment which is light-years beyond any architectural magnificence, on earth or in heaven.

First rule of Cor Unum Abbey …. Jesus Himself is our cloister, and we make our hearts a dwelling place for His abiding. (John 15: 4 and 7)

One of the most well-known of those who founded religious orders was St. Benedict, who wrote his “Rule” that others who chose to live together in their pursuit of the Lord might do so as effectively and righteously as possible. Many others followed, among them St. Francis and St Clare and Finnian of Clonard, in Ireland. Many serious-minded seekers after faith and righteousness left record of a written, personal “rule.” George Washington had one, a guide for living a life of integrity, and among his peers he stood out, unequaled in their eyes. Marines and West Point Cadets have Codes of Honor and of Conduct, and so do physicians and fire fighters and nurses and brick-layers, too, when they are at the top of their field.

If you look up “code of conduct” on the internet, you will see everything from a Jedi Code (the Wookieepedia) to rules for Sharia law. In between are such things as “May I Shake the Lady’s Hand,” an expose on Hebrew cultural manners, and a code of ethics for those who work on Mercy Ships, bringing medicine and surgical care into Third World countries. Of particular interest is an article that stresses the importance of introducing a moral code to children at a tender age, suitable for their years.

In this sanctuary, we order our lives according to the leading of the Holy Spirit upon our own hearts; the only Superior here is one’s own ability to listen and obey as God leads us onward. Ever in keeping with the written Word of God, for us it’s rather like making good resolutions each New Year and actually keeping them. Where the Bible addresses “surfeiting” and “buffeting the body” and watchfulness with “prayer and fasting,” we make a start, with small steps in a right direction. Excesses of discipline and excesses of lethargy and laziness are both ungodly, so we keep to a humble path. It is humbling to keep going with only the smallest of successes, and it is humbling to come to terms with how hard our “flesh” will fight to be free from any spiritual progress whatsoever.

Monks and nuns who have paved the way in “real” monasteries have greatly helped us. Like the Marines, we will become a no excuses kind of Abbey, but ever in the ways that suit our individual lives and our calling in the Lord.

Many of us have had or do have children or employees under our watch-care. How often have we expected of them an adherence to simple rules that we ourselves did not emulate in our private lives. Eat your vegetables, brush your teeth, finish your homework … while we struggled with the effects of poor nutritional choices and a crushing disorganization or a troubling impatience that we could have repaired if we had been obedient to our own good sense. “Eat your vegetables,” “brush your teeth,” “finish your homework,” is to them what drink less coffee, get proper sleep, and be on time ought to be to us.

Here in this Abbey, change will take place, most of it gradually, and all of it in the direction of a closer walk with God, enhanced personal relationships, and a much more effectual life of prayer. We will begin to dwell in Christ in that settled down way that depends upon hearing and obeying, and upon the cultivation of an unfeigned love, of peace, and of joy.